You are here: Home1 / Clinical Studies

The Viral Inhibitor received a 4+ rating out of 5+ with an 86% overall clinical rating!

A CASE FOR ELECTRO THERAPY.. Lindemann 1998

Dramatically: Self was only 1/4 day, 34 times faster than Control and 14 times Office!

The Electrical Control of the Body

The body uses a capacitive state to generate a potential from which stored energy is used to run cellular processes. The cell membrane is an electric capacitor in which two conducting media, the intra-cellular and the extra-cellular salt solutions are separated by the non-conducting membrane. The electrical potential across the capacitor is proportional to the number of charges that are held on its plates. At this basic level, cell energy function can be manipulated electronically.

Damage to this system, in the form of a pathological or viral state, causes a current of injury to the overall electromagnetic environmental balance of the system. Laboratory research by applicant and others has shown that a negative charge acts as a trigger for healing growth control systems.

Embryonic cells know which respective tissues to differentiate into, the nervous system uses electrical pathways for orientation of growth and regeneration, and this current is used in lower organisms for control of cellular differentiation and limb.

The cell membrane is made of a bi-layer of phospholipid sheets. A single phospholipid has a charged polar head group with a (hydrophobic) hydrocarbon tail. Two sheets of these asymmetric molecules, placed tail to tail, gives rise to a leaflet membrane with the polar heads facing out on both sides. The polar groups are hydrophilic and interact with the aqueous exterior/interior, thereby forcing the hydrophobic tails to interact and hold the membrane together. This hydrophobic core is at its lowest energy state which maintains this structure. Due to the charged groups on the outside and the hydrophobic groups inside, the membrane itself is impermeable to most molecules and ions which makes it an ideal organizational structure for a living mechanism. The cell may selectively determine what it allows in or out utilizing transport mechanisms.

An integral membrane protein (IMP) is a large molecule that spans the entire lipid-lipid bi-layer. Part of the protein is on the outside, extracytoplasmic surface. It crosses through the membrane interior and extrudes into the inside cytoplasmic portion of the cell. These proteins interact hydrophilicly on the outside on the extracytoplasmic and cytoplasmic sides with charged proteins while interacting with the non-polar interior with hydrophobic proteins. This insures their stability and direct orientation within the cell membrane. The IMP is a long string of amino acids and may span the membrane many times (by going back and forth as a thread may span a clothes seam) and in so doing, create a pore or channel in which ions or molecules may selectively pass.

Facilitated diffusion is much faster than passive transport because it utilizes the IMP to create a pore/channel through which molecules may pass (therefore, the rate limiting exterior step is based on how it permeates the polar, then hydrophobic interior, etc.). The process is specific as to which ion or molecules may go through each channel. The rate of transport is determined largely by cellular concentration gradients and permeability of the channels. In certain cases, the permeability of these pores changes by external influence. One of these external influences is electrical current.

Active transport is the third mechanism by which the cell uses membrane proteins to regulate its environment and control species concentrations on either side of the cell. Active transport requires the absorption of energy to drive the transport of a molecule or ion. The transfer may go up or down the concentration gradient or may carry an ion across the membrane and hydrophobic interior. This is not possible by diffusion. The protein complex that accomplishes this reaction turns the stored energy of a molecule such as adenosine triphosphate (ATP) into a potential stored energy by forming a gradient of ions or molecules across the membrane. ATP is the energy currency of the cell, it has a highly exergenic bond of the third phosphate group. The reaction hydrolyzing this bond liberates energy which is used to fuel biochemical reactions. The formula being ATP . ADP+Pi. An ATPase is an enzyme that catalyzes the hydrolysis of ATP.

This concentration gradient of charge for moving ions to one side or chemical for moving a solute such as sugar to the interior, that we develop, is a form of potential energy that can accomplish work for the cell. This is in accordance with conservation of energy i.e., energy in the form of ATP is converted to a chemical/electrical gradient.

An integral membrane protein essential to the cell is the Na+/K+ATPase. The protein spans both sides of the plasma membrane creating a controllable gate with a chemical that separates the respective ions to either side of the membrane. The separation is in unequal concentrations and creates an electrochemical gradient or potential across the membrane. This unequal charge distribution has the property of capacitance and acts as a battery with a potential determined by ionic differences. Discharged distribution of stored energy is the basis of cellular control of biochemical processes and the primary function of our nervous system. Electric current profused through the tissues creates a force of electrically charged ions present at interfaces between different types of tissues and cell membranes. Conduction of current through the tissues depends on ionic movement.

When electrical currents are introduced into the body, ions accumulate at the tissue interfaces and at the cell membranes, creating a charge that is opposite to the charge at the voltage applied at the electrodes. The potential difference that occurs between each electrode and the tissue is created by an electrolytic polarization. This phenomenon occurs in living tissue, and is comparable to a conductor with capacitance.

The device is used by applying the two metal tips of the probes to the body on either side of the area that contains the lesion or is being irritated as by tingling or pain or other indication of the onset of development of a lesion. The device should be applied as soon as possible after the onset of symptoms and preferably within the first fifteen minutes. The device is held to the skin in the affected area for approximately two to twenty seconds and this process is then repeated hourly for up to eight hours or longer if a lesion actually erupts. In the case where a lesion does develop, the procedure continues until healing. The specific duration and time intervals can be adjusted to best match a particular symptom.

Low voltage electrical current, when applied to the lesion site, or a possible lesion site, appears to penetrate the protein envelope barrier which protects the virus from destruction. As the herpes virus manifests itself via the nervous system, a treatment route is provided to pervade the system and attack the virus using the electrical properties of the nervous system at the cell level, to combat the virus.

An electrical current can radically change the response of the healthy cell to the invading virus. This appears to be accomplished by stimulating the mitochondrial function of the cell to return to normal the ionic balance inside and outside the cell. The foregoing clinical study has been an example of the electrical manipulation of the biochemistry of pathological cells in a viral medium. It was found that both pathological cells and virus are affected to a significant extent with the application of low voltage electrical stimulation at the site of that interaction. The most significant affect appears to be created by the treatment of a virus produced pathological state at the onset, whereby the virus has not had an opportunity to fully invade the system, or reach its fullest strength.

The key to effective treatment of the herpes virus, whether it is Herpes Simplex 1 or Herpes Simplex 2, is the beginning of treatment by low voltage electrical stimulation at the possible site of a lesion, as indicated by tingling or other pre-lesion symptoms, as soon as the symptoms are felt. Delay beyond the first 12-18 hours after the first symptoms will usually result in lesions occurring, although if treated, the duration is greatly reduced.

The results of this study would further indicate the need for the Herpes virus patient to be provided with and carry with them at all times, the Cold Sore Inhibitor, that they would be able to use immediately upon manifestation of a pre-lesion condition.

Want to join the discussion?
Feel free to contribute! 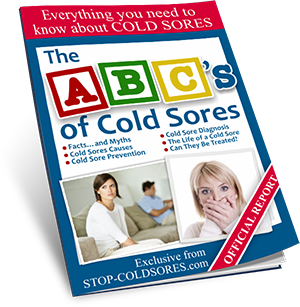